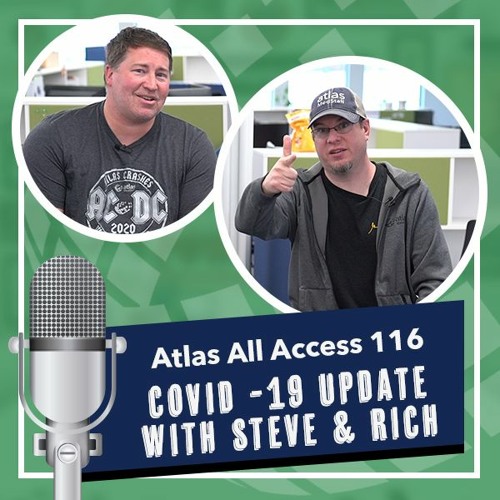 We're all beat up. Our team is working from home and we have a skeleton crew in our 20,000-square-foot office. BUT -- we are working harder than ever for *you!*

In fact, Steve and Rich are getting a ton of productivity out of us since we're putting in even longer hours at home. Wait -- was this Steve's strategy all along?

In all seriousness, things are still weird, and we get that. Check out this update from Steve and Rich as we look at how the travel healthcare industry is sitting, where the jobs are, and what we're seeing from our partners.

At the end of the day, our message is the same: Know that we are all here for you, working for you... in our own houses, practicing safe social distancing to help you.

Steve Ryan: Six feet. We got this.

Rich Smith: Six feet apart. Atlas All Access starts now. Okay, we are on week, what?

Steve Ryan: We're all beat up.

Rich Smith: But as you can see, everyone at Atlas is still working from home. There has been a small skeleton crew here working here. And by small, we mean like maybe seven or eight people a day, and that's it. For 20,000 square feet, that's a lot of empty space. And I can only say I'm getting tired of it. I want to get more people in the office, but ...

Steve Ryan: It would be nice. But honestly, we're always going to be safe, and we'll probably be the last office that brings people back, until we do have a shot in the arm that fixes everything. So ...

Rich Smith: We have been set up since the beginning, and I've said this multiple times, for everyone to work from home. It's been one of those things that we've been very proud of, that you can work at Atlas from anywhere, and talk to your traveling healthcare professionals wherever they are in the country from the comfort of your own home. So for cases like this, and it really played into our favor this time.

Steve Ryan: It really did. And we've been through some downturns in the past, and we knew how important flexibility and family was. And we just got very fortunate. The day this all happened, we basically said, "Hey, you're working from home, and then we turned the switch on, and everything worked kind of flawlessly. So we were kind of blessed in that aspect that we were set up that way. And it's allowed a lot of people to be around their kids 24/7. So I think they want to come back to the office, but we're going to take the safe route always. So ...

Rich Smith: Yeah. So to give you an update, I talked about it in the VIP email just earlier this week. We're starting to see some of those jobs come back. It's not quite there yet, though. So the message from us is still the same. If you are somewhere right now and the extension offer is there, you probably should take it.

Steve Ryan: Yeah. And from the get go as a company, the most important thing to us was people safety. We wanted you to be in environments where you knew the staff, you knew the safety protocol, you had your apartment already, just had that routine. Because when craziness happens, the last thing you want to do is chase into it. So we asked a lot of folks to stay put and see how it played out. And honestly I think that was the right call. We kept people safe, and around the team that they knew the best, so they could handle this virus. And it's been really crazy online. You can see a lot of, "Chase the $10,000 rate. Chase the $5,000 rate," but then you see people just beat up from it. And money isn't always the most important thing. So I think that's something that we've always stressed here, is just doing the right thing every day, and taking good care of people. So ...

Rich Smith: Right. So, you'll probably see more of him and I in the office, just trying to hold down the fort while everybody is still doing their part with social distancing. But the message is going to still be the same.

Steve Ryan: Yeah. Do the right thing every day. I mean, I think the biggest thing is we're in the middle of the storm. Every hospital is really financially hurting right now. Understand when people are financially hurting, they're going to make decisions, it's a business, right? They got to keep the doors open, so you will see some cancellations. We are seeing that taper off. A lot of the systems now are flattening out on the cancellations, and we're starting to see more jobs start to open up as the states open up, as the surgery centers start to open up, that cash starts to flow back into the hospitals. So we'll get back to our normal. Basically, you're going to see that big drop-off, and then you're going to see it start to come back. And then once the states start to open up, it's going to normalize.

Steve Ryan: So as a traveler standpoint, and the best advice we can give you guys right now is if you're at a current location, be flexible, be on time, don't be calling in, do everything you can to help the hospital out. They are dealing with a lot, and I know it's a scary environment, and there's a lot going on, but be there for your team, and the people you work with every day. Know that Atlas has your back. Know that we're going to always make the right decision, and we're going to take care of you. The stability is there. Our company is very strong. So, we have no fears that it's going to get back to normal, it's just a matter of when.

Steve Ryan: It really is. But just know that this is going to be something you're going to talk about a year from now. It was scary. The world changed, and you just got to go with the flow, and kind of look at the world a little differently now. So, but when it comes down to it, Atlas has your back. We're very solid. Please don't chase, I don't know how many times I can say that. Find your stability, find your solid center, and stay there, and know that we have your back. So ...

Rich Smith: Yup, so as much as maybe the whole office won't be here for you, they're at home.

Steve Ryan: They're working a lot more now than ever.

Rich Smith: They are working a whole lot more now than ever. So we'll be here in the office. So, as you heard, that phone is still ringing. Things are still happening here, so ...

Steve Ryan: All right, if you have any questions, reach out to us. We're ready.

Rich Smith: His phone number is on the website.

Rich Smith: Or, Dolan will put it right here.

Steve Ryan: Dolan, don't do that.

Rich Smith: Do that. See you next week.